Milan, capital of Lombardy, a little less than 1,4 millions inhabitants and one of the most populated metropolitan areas in Europe. In few words, the economical capital of Italy.

I spent a lot of time there during these last years, working for clients in any part of the city and often of the “Greater Milan”.

I personally went through the experience of commuting from place to place and, although Milan has a very efficient underground system, it sometimes happens that, because you have little time to move or the place you need to reach is far away from any transport stop, you would prefer to travel by alternative ways.

I’m strongly focused on the “experience” of commuting, so my concept is to simplify people’s life.

My work goes to those people who don’t want to look for a ride, don’t want to organize, to ask, to wait for an answer, to waste time. Everything could be frustrating.

Am I driving? I can offer a ride. Do I need a ride? Just take it.

Although I’ve commuted many times, I needed some statistics on which to base my assumptions and validate my concept, and I perfectly know that working with real world data is often essential to avoid preconceptions.

Thanks to Italian National Institute of Statistics (ISTAT) I immediately have been able to find what I was looking for; based on report “Daily movements and new forms of mobility” (Nov. 2018) I quickly found out high rates of people involved in my research; below some statistics data:

51,6% of working people move out from municipality of residence

81,6% of people use at least a single mean of transport

73,7% of them prefer to use private vehicles, only 7% use public transport

Here we are, these data gave me some insights I needed to validate my idea; although the amount of data was greater, I decided to focus on this market niche, in order to conduct some important user interviews in the real environment as well.

Since this personal project doesn’t yet exist in reality, and some existing “providers” offer a service significantly different from my concept (so I could not even base on their customer’s reviews) I personally conducted some observations, as well as user interviews, to get qualitative data and understand the hypothetical context of use of the app.

Learning about the problems of potential users is a great way to be inspired; based on a group of 20 users, of which 8 by an observation period on real context, I could better understand users’ particular needs and highlight some pain points.

I collected several insights and then grouped on an affinity map, in order to create personas.

I took into account a niche of commuters with very similar path, moving from home to work place, so I could work on building personas deeply understanding needs which get them to use the app.

I identified 3 different personas with similar aspirations but different context:

I created scenarios describing my user’s experience with the app. This is a good way to explore how the product will be used in different contexts and how the app could be used to solve problems or achieve a result.

Going back home from work

Marco is going back home from office, waiting for his train to arrive.

He’s a little tired, last night he came home later than usual and this night will probably be the same.

He’s taking a look at his smartphone, reading some magazines online, checking the e-mail when he thinks he would have been able to save time if he’d have had his car or a ride by.

He opens the carpooling app and it instantly matches his daily route with 3 other people’s route right now, and 7 for the morning after. Got it for tomorrow! And go out mindless, tonight.

Camilla is having lunch in the park, just opposite her office, it’s a wonderful sunny day and so’ll be tomorrow.

Let’s have a look at her smartphone, having chat with her friends and taking a look at Instagram.

Just remember her husband will need to leave home early on the morning after, and won’t be able to take children to school. Ok. She opens the app, there are 12 matches based on her daily route and she only needs to choose one; she’ll be picked up near her children’s school at 8:30. Problem solved.

After the morning yoga course

Martina often wakes up early, to go to her favourite yoga course. After that, she’s taking a rest in the waiting room before going home, and then going to the office.

She spends 5 minutes more to listen to the music, at the same time reading about world news on the internet. At the same time she has 6 notifications by her carpooling app, and only has to accept one, and continue doing her stuffs, without thinking of how going to work today; they’ll pick her up.

After developing Personas and Scenarios, I could figure out some pain points, which also led me to take into account to put some “nice to have” into the app.

Concerned about loosing the ride due to the delay

Last second use of the app

These data led me to think about improving the hypothetical development side (including a real time position function and a smart matching system) as well as some functions to offer an experience as simple and intuitive as possible to achieve users’ goals.

Once collected all the information to understand how users could navigate through the app to satisfy their needs, I can work on skeleton of the app, its information architecture.

I always prefer to use wireflows, merging low-fi wireframes and user flows. 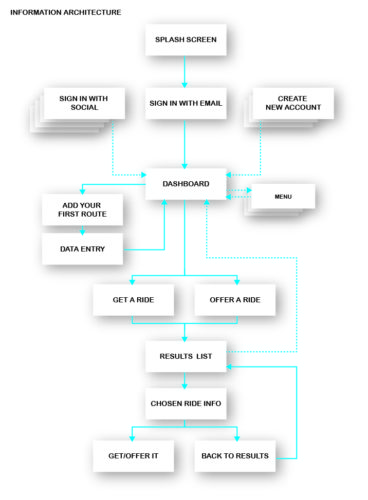 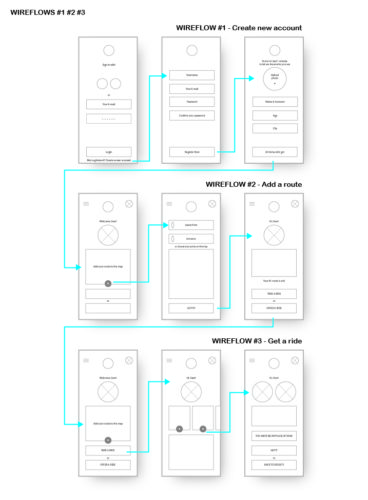 I intentionally divided this project in two parts: the first one to highlight everything concerning the UX study, and the second one about the development of the UI.

To keep reading about UI design of PickUApp project click here; you can also find it on my homepage in WORKS section and on my personal page on BEHANCE.

Thank you for reading.